Got car issues? Well, we've got the answers! Welcome to the BlueDevil Products Auto Blog! Easily search thousands of entries to find exactly what you're looking for. Need advice on a dealing with a blown head gasket? Oil Leak? Cracked block or leaking radiator? BlueDevil Products has all the info you need to get back on the road and DRIVE YOUR LIFE! Be sure to leave a comment or question on anything that may interest you. You can also send an email to our pro for direct assistance!

All car and truck engines have accessory belts.  These are the belts at the front of your engine that you can easily see when you pop your hood.  They drive things like your alternator, power steering pump and air conditioning using power from a pulley on the end of your crankshaft.

Timing  Belts are a different kind of belt altogether.  These belts are always hidden behind some type of plastic shielding and they will have teeth rather than ribs.  These teeth help keep the crankshaft and camshaft pulleys in proper alignment which is very important to keep your engine running properly.  Timing belts should be changed at the factory recommended intervals and are a relatively difficult job.

Accessory belts, on the other hand, are more often changed based on what they look like rather than a time interval.  If the ribbed or “V” side of the belt is cracked, shinney or has frayed edges, then it’s time for you to get a new belt installed.

How to Replace your Accessory Belt 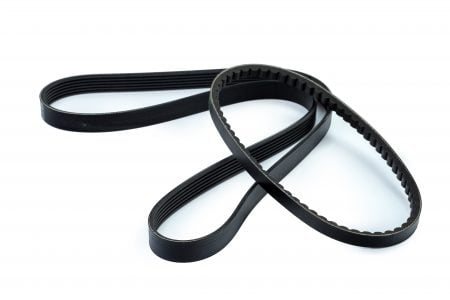