How can it be that the level of coolant in your car is low but you don’t seem to have a leak? Aren’t low coolant levels an indication of a leak? And what is the big deal about coolant in the first place?

It is possible for levels to drop without a visible leak, or any leak at all. Let’s take a look at the critical role coolant plays in an automobile engine and then determine how low coolant can occur without a leak.

What Is the Purpose of Coolant?

The engine of your car or truck is an inhospitable place for just about anything. Sparks are igniting fuel and air and creating hundreds of explosions every minute inside it. Additionally, mechanical parts are moving at hundreds of miles an hour against each other continuously. It is an incredibly hot ecosystem—roughly 195-220 degrees Fahrenheit under ordinary conditions, and even hotter for short periods of time. To give you a sense of how hot that is: Water boils at 212 degrees.

The metal parts inside the engine are designed to withstand hot conditions, but much higher than 220 degrees for an extended period of time would damage them. To keep them from overheating, the cooling system pumps coolant—a 50/50 mixture of water and antifreeze—through the engine to absorb the heat and cool it down. The coolant is then pumped to the radiator where a fan blows the heat out into the atmosphere, dropping the temperature of the liquid. The coolant in the radiator is then pumped through hoses back towards the engine where it begins the cycle all over again.

When it comes to the two elements of coolant—water and antifreeze—water does the work of absorbing heat from the engine and relinquishing it into the air. Antifreeze keeps the water from boiling while the vehicle is operating and from freezing solid in the winter. Additionally, antifreeze includes additives that fight corrosion in the radiator and in the cooling system’s hoses and water pump. Water alone would boil and freeze; antifreeze alone would not cool the engine very effectively. Together as coolant they make a great team and keep the engine running smoothly for thousands of miles.

Why Is the Level Low but There’s No Leak?

Make no mistake, low coolant level is a problem that must be addressed. The cooling system is designed to be a closed system, meaning nothing should enter or exit. With all the parts involved—hoses, radiator, radiator cap, overflow reservoir, water pump, etc.—there are many opportunities for liquid to leak or evaporate out of the system, or for contaminants and other fluids to find their way into the system.

If the amount of coolant in the system is diminishing over time, it means it is exiting the cooling system somehow. Often, the leak is so slow or in such a hidden place that it is not visible. For example, a hairline crack in the radiator cap can allow tiny amounts of hot coolant to escape into the air without any visible clues. The amount becomes noticeable over time, but it is difficult to identify the source of the leak. Anytime your vehicle experiences a loss of coolant and you can’t find a leak, check the radiator cap.

The solutions to this particular situation are easy and inexpensive. Coolant may simply be added periodically to replace what is lost. If the problem remains small, this solution may be satisfactory for a while. Most likely, replacing the radiator cap will become necessary because the cap not only keeps coolant in the radiator, it also maintains the pressure necessary inside it for the fluid to be pumped around the engine. The good news is radiator caps are simple and inexpensive to replace.

The issue may be even simpler if the radiator cap is not secured correctly. If that is the case, simply removing it and screwing it back on can solve the loss of coolant.

Other Reasons Coolant Is Disappearing

Another reason the coolant in your car may be disappearing without any visible trace is because the leaking coolant is coming in contact with the engine block and burning up. This scenario may be a small problem like a crack in a hose or a big problem—more on that in a bit.

Coolant may also leak from the overflow reservoir or the reservoir cap. The most common issue with a coolant reservoir is a miniscule rupture in the plastic that is allowing coolant to escape. If the leak is small, it may not be obvious. Steam or slow drips may be difficult to discover or pinpoint.

The reservoir is particularly prone to this issue because the coolant is always hot when it backs up into the reservoir. Although these leaks are small, refilling is only a temporary fix. Eventually the reservoir must be repaired or replaced.

It is important not to overfill the coolant. When adding the water-antifreeze mixture, pay attention to the overfill line in the radiator. Putting in too much taxes the reservoir and can cause a leak.

Small coolant leaks can often be fixed with a chemical additive formulated specifically to repair them, like BlueDevil Coolant Stop Leak. The fluid bonds to aluminum, alloy, or plastic, and eliminates the further loss of coolant from the system.  To use, simply allow the engine to cool, then start it up and run the heater at full blast. Slowly pour the contents of the bottle into the radiator and secure the radiator cap. Allow the vehicle to idle for 45 minutes to circulate the product. Turn off the engine and allow it to cool for an hour before starting it up again. Leaks should be sealed.

Coolant leaking from the radiator may exit the front of the vehicle along with the heat, blown away by the radiator fan. Small leaks may be soldered but larger ones will require a new radiator. Replacing the radiator can cost $1,000, so finding the leak sooner rather than later can save hundreds.

A Blown Head Gasket Can Cause Coolant Loss

The worst-case scenario leading to coolant loss is a blown head gasket, fractured cylinder head, damaged cylinder bores or other major engine damage. The head gasket separates the engine block from the cylinder head. When it corrodes or cracks, it allows gas, coolant and oil to mix, potentially fouling the combustion process, reducing the lubricating properties of oil and preventing coolant from reducing engine heat. Additionally, as it leaks into the oil, less of it is available for cooling the engine.

The head gasket endures searing heat, immense pressure and the constant battering of the various fluids just mentioned. When the head gasket blows, the engine is in danger of imminent failure.

Fixing a blown head gasket is time-consuming and expensive because much of the engine must be disassembled to access it. A typical head gasket replacement costs $1500-$2000. Fortunately, this is much less common than leaking hoses or a corroded radiator.

If the head gasket is indeed the culprit, it may be possible to avoid that kind of expense with BlueDevil Head Gasket Sealer. It is poured into a cold engine with the engine running and heater turned up. While the engine is idling the sealant reacts to the temperature differential at the leak point, forming a permanent bond that is safe for the entire cooling system.

Whether the cause of coolant loss is in the radiator, hoses, reservoir or a damaged engine part, the common denominator is that it must be addressed. Given enough time, coolant loss will lead to other damage to the water pump, radiator, engine and more. When a car’s coolant level gets low, the best course of action is to bring it to a car care professional to find the source of loss and repair it immediately. Doing so will cost a little upfront but save a lot in the long run. 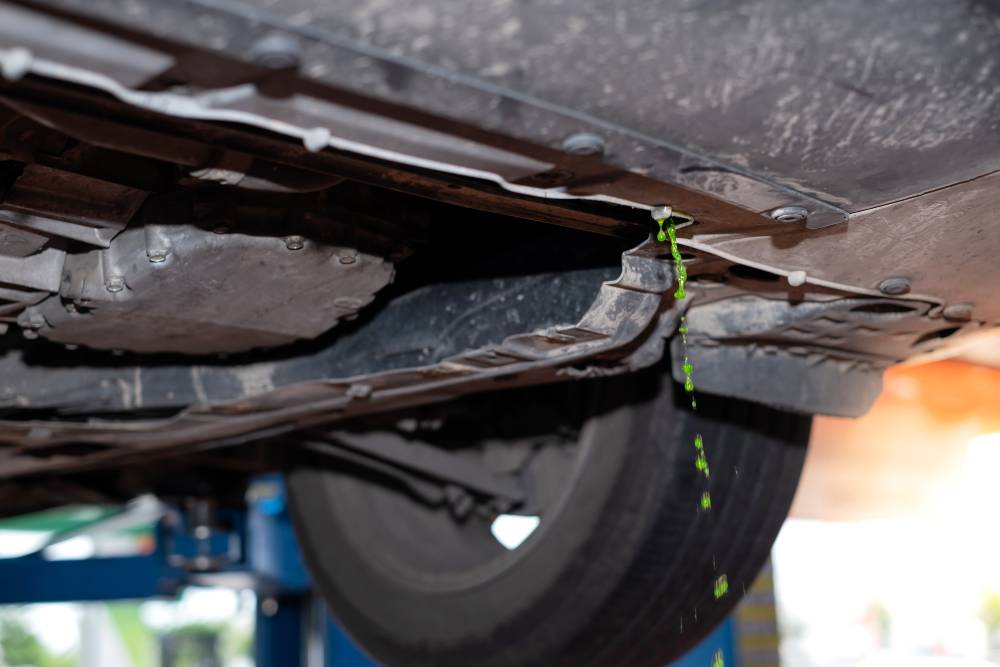 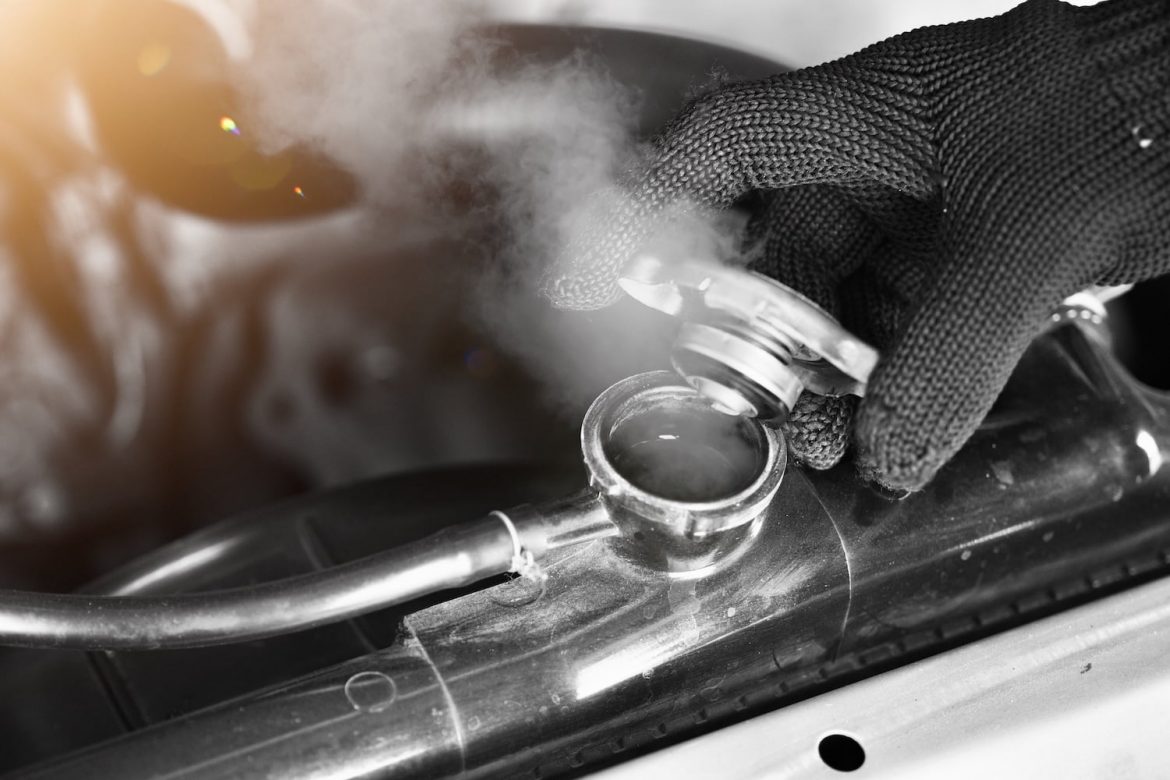 How to Flush the Radiator in Your Car or Truck 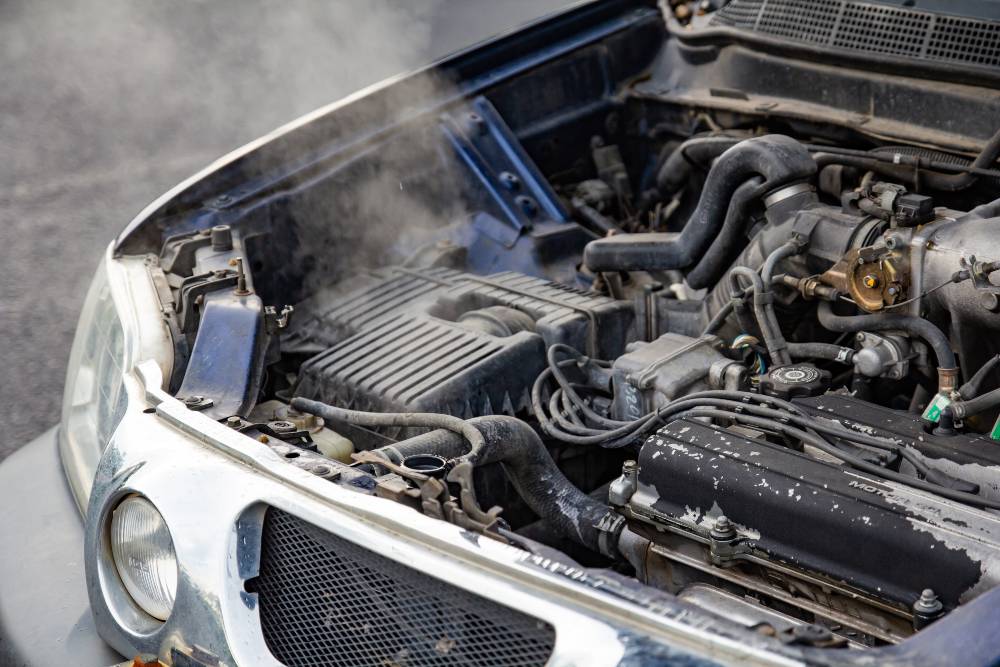 7 Reasons Your Radiator Is Leaking