“Your timing chain broke.” “You need a complete engine overhaul.” “You blew your rear main seal.” “Your mother-in-law is coming to stay for a few months.” These are among the scariest phrases for any vehicle owner. Add one more to that list: “You have a blown head gasket.”

When it comes to an automobile, a blown head gasket is on the Mount Rushmore of problems you don’t want to have. The reason is this: Head gasket repair is a very expensive proposition. It can easily cost $1,200. Even for an experienced DIYer, it is a big pain in the neck. Repairing a blown head gasket yourself can save most of that $1,200, but just be aware that it will require setting aside a whole day.

The Life of a Head Gasket

The head gasket’s job is to do nothing. Just stand there. But where it stands is an important place, and just standing there is a tough job.

The head gasket’s place is at the interface between the engine block and the cylinder head. In the cylinder sits the piston, pumping up and down hundreds of times every minute with the help of lubricating oil. The engine is home to the internal combustion system in which sparks ignite fuel and air for explosions that move the pistons.

Complicating matters is this: Explosions don’t occur, at least not efficiently, if motor oil gets into the ignition space. And pistons don’t move inside cylinders if the oil is leaking out.

So on one side of the head gasket is fire and immense air pressure. On the other side is endless vibrations and heat. Standing there is tough work. The head gasket must be able to withstand heat, pressure, chemical attack and the pounding effect of all that goes on around it. It must never crack, corrode, shrink, slip or take a vacation day.

Head gaskets are designed to last the life of the vehicle. But sometimes they don’t. Then, they must be taken care of immediately.

Replacing a head gasket is incredibly easy. Remove the old head gasket and insert the new one. The problem is getting to the head gasket. It’s like the honey you stuffed in the back of the pantry somewhere that you haven’t opened in two years. Using it is easy, but first, you have to remove everything else from the pantry to get to it.

It’s the same with the head gasket. So let’s get started.

How to Fix a Blown Head Gasket

Start by putting the vehicle on a lift or by engaging the emergency brake so the vehicle doesn’t move. For added safety, don gloves to protect your hands and goggles for your eyes. It is a good idea to have the vehicle’s repair manual on hand before starting. If you don’t have one, manuals for most common vehicles can be downloaded from the Internet.

Drain the engine oil and coolant, disconnect the battery and remove the fan shroud at the front of the engine. The radiator can be removed fairly easily, but it doesn’t have to be. Everything that is removed comes with screws, nuts and bolts that must be accounted for. One trick is to employ little baggies for each set of screws. Label each so it is clear which items belong together.

Remove the plenum chamber that is attached to the throttle body. The fan must then be removed, which sometimes requires a special, large wrench.

That exposes the serpentine belt, which routes around a series of pulleys. Take a photo of the pulleys and the routing pattern to expedite reattachment of the belt later. Remove the belt, the pulleys and the water pump. Unscrew the air conditioning compressor and move it out of the way. It is unnecessary to remove it entirely.

Unhook the spark plug wires and drag them out of the way. The same for all the hoses and wires. The throttle body may also have to be removed. If anything is oil-covered or otherwise dirty, clean it up with a rag.

It may be necessary to remove the fuel line. This can be done by holding the line and pulling the connector forward to release the other end of the line, or by using a special tool.

The intake manifold and cylinder head must also be removed. They are heavy, so be careful with them.

Next remove all the bolts holding the valve cover and remove it. The valves are now exposed, so be careful about keeping debris from getting into the unit.

The spark plugs must be removed next. Use a spark plug wrench for that. Then, unscrew all the bolts holding down the cylinder head and keep track of their order. They are going to have to be re-installed in the same places they came out of. After ensuring there are no further wires or hoses connected to the cylinder head, lift it out. It is heavy and there isn’t much room to maneuver, so a second set of hands can be helpful.

That little slice of metal sitting atop the cylinders is the head gasket. Pull it off and inspect everything around the cylinder block. If anything is cracked or corroded, there may be another issue. Clean the top of the cylinder head and make sure no warping has occurred. Consult the repair manual for warping tolerance.

If everything passes muster, clean up the cylinder heads with a toothbrush and the cylinder walls with an oil-soaked rag. Then install the new head gasket with the correct side facing up.

Next it is just a matter of replacing everything that has been removed. Making sure everything is clean, attach everything in reverse order. In the cylinder head, it is necessary to follow the repair manual for the sequence of bolt installation and the amount of torque to apply. Over-torqueing the bolts will cause cracking and under-torqueing will not secure the cover.

Once everything is re-installed, new oil and coolant must be added. It is often a good idea to flush both the oil and the coolant before adding new, because oil and coolant leaks were likely the tipoff that the head gasket had blown.

When Replacement Isn’t an Option

For around $40, many head gasket issues can be rectified. If replacing the head gasket isn’t an option, try a bottle of BlueDevil Pour-N-Go Head Gasket Sealer. It is formulated for easy use and a single 16-ounce bottle is sufficient for a 4-cylinder or 6-cylinder engine.  We also have a “Mechanic Approved” version that is more concentrated – BlueDevil Head Gasket Sealer

How to Use BlueDevil Pour-N-Go Head Gasket Sealer

With the engine cold, drain 16 ounces from the radiator. Start the engine and turn the heater on max. With the transmission in neutral or park, slowly pour the sealant into the radiator over the course of a minute. Replace the radiator cap and allow the vehicle to idle for 50 minutes so the sealant can circulate.

That’s it! One hour and $40 often solves the problem immediately and permanently. If the problems that led to the diagnosis persist, fix the blown head gasket or bring the vehicle to a professional mechanic. When sealant does not work, that is an indication that the problem runs deeper than a simple issue with the head gasket. 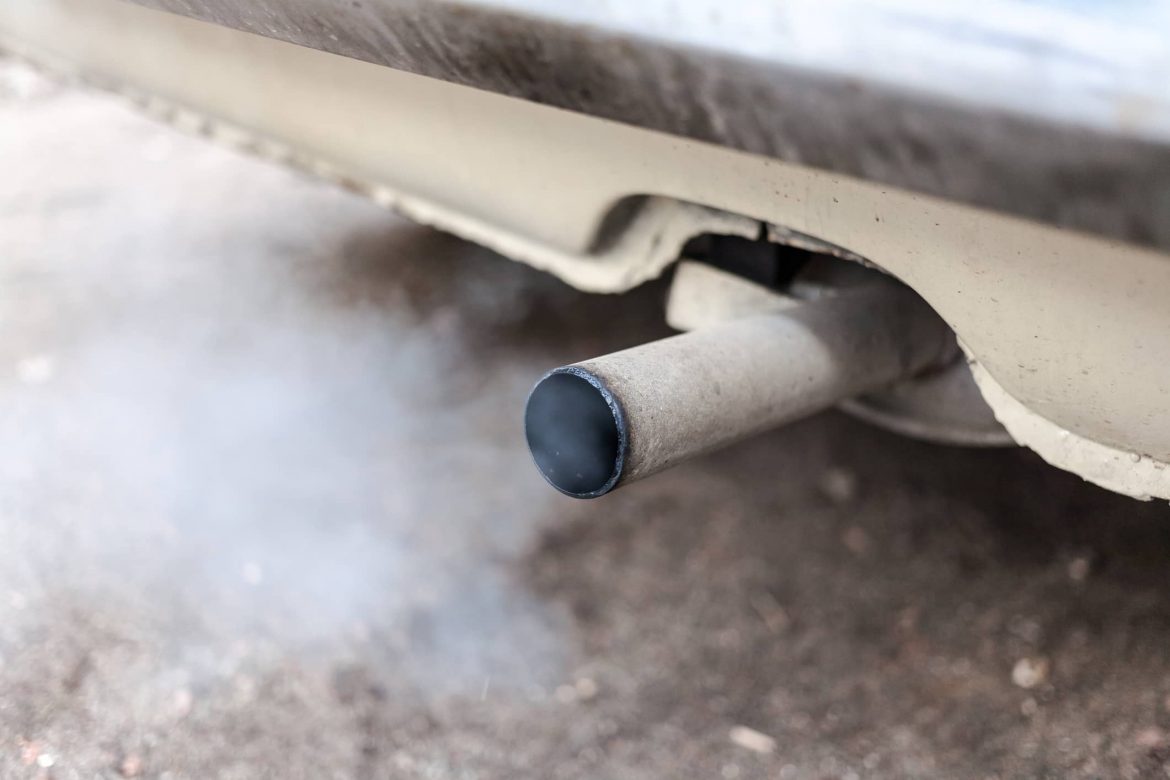 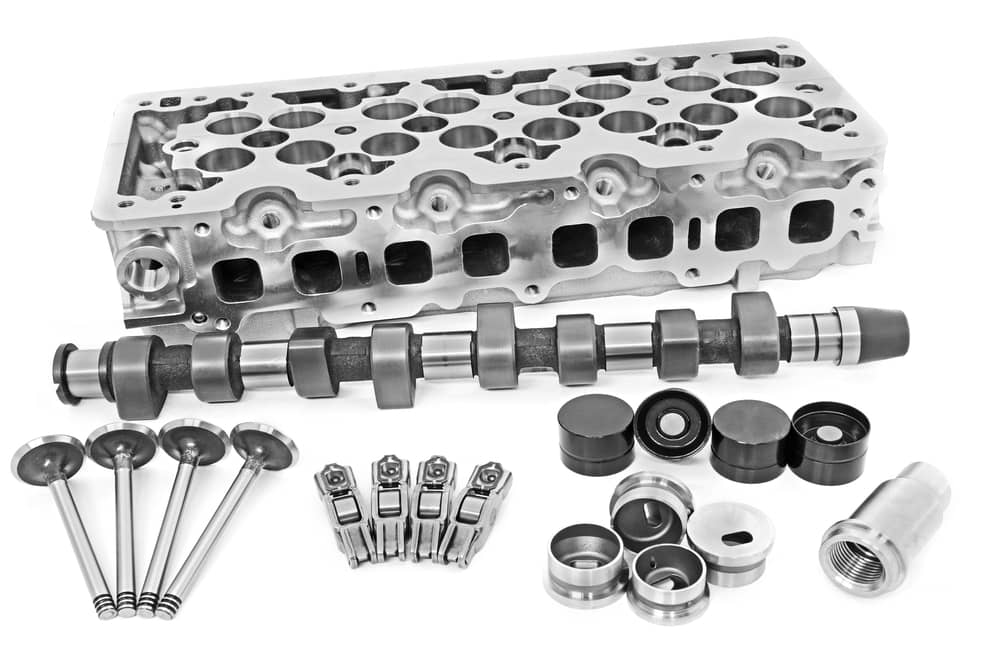 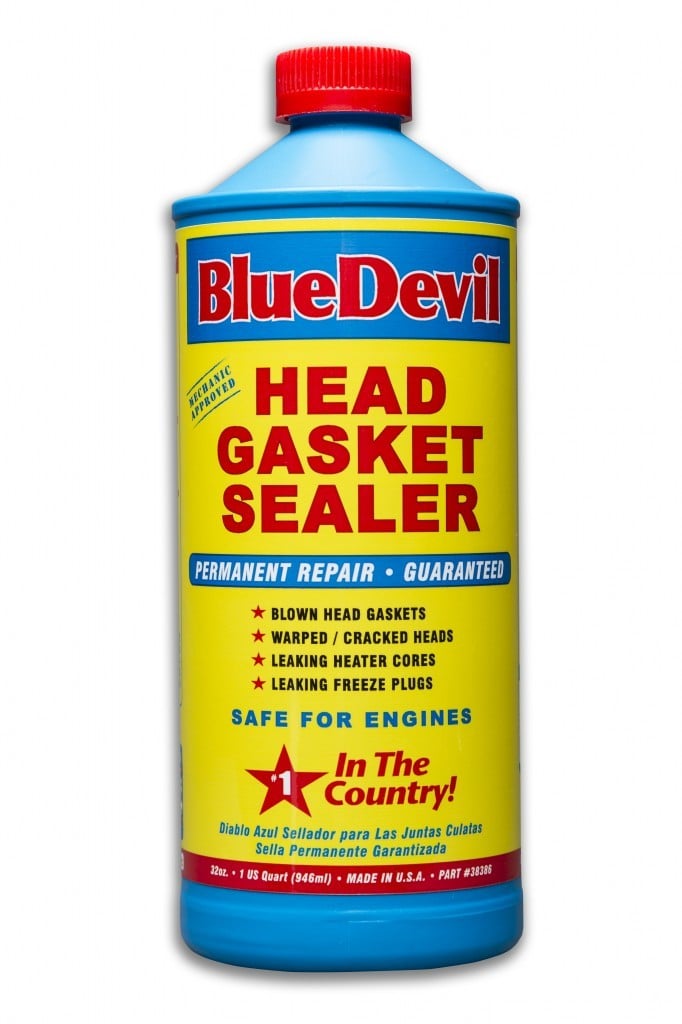