It has often been said that the greatest invention of the 20th century is air conditioning, which made living in warm climates more attractive and automobile travel in summertime bearable. Today, demand for air conditioning in cars and trucks is so universal that it is nearly impossible to purchase a new automobile without it. The air conditioning system in your car or truck is a complex system that runs on one of three different refrigerant types, most likely refrigerant R134a. Although other parts of your car A/C system can break or wear out, the most common issue with a vehicle’s A/C is a refrigerant leak.

For that reason, it is important to understand the three refrigerant types used in A/C systems in cars, so you can purchase replacement refrigerant appropriate for your vehicle.

R12 refrigerant (freon): Until 1995, the universal refrigerant for car air conditioners was freon, the gaseous element sometimes known as R12 refrigerant. Freon worked well because it is inexpensive and cools to a liquid at around the freezing point of water but otherwise remains in a gaseous state that absorbs heat well.

Sadly, the extensive use of freon turned out to contribute to the rapid depletion of the Earth’s ozone layer, which filters out most of the sun’s harmful UV rays. This is why freon was banned from all new cars sold in the U.S. starting in 1995. It is still legal to drive an automobile with freon refrigerant in the A/C system as long as the vehicle was manufactured before 1995. Many classic car owners have retrofitted their vehicles to employ a freon replacement for their AC units.

R134a refrigerant: The refrigerant most likely in your vehicle today is R134a, the freon replacement selected for its effectiveness and low risk of flammability. R134a is friendlier to the ozone layer, but it is not friendlier to the environment. R134a contains greenhouse gas that doesn’t break down quickly and thus contributes to the heating of the planet that characterizes climate change.

R1234yf refrigerant: Vehicle manufacturers began the transition to using R1234yf in A/C systems several years ago in anticipation of the 2021 federal mandate to switch from R134a. By 2019, 27 of the top 40 selling car and truck models had outfitted their air conditioning units to run on R1234yf. This new refrigerant works as well as its predecessors while breaking down into harmless components in 11 minutes, causing almost no environmental impact. It has been required in vehicles sold in Europe since 2011 and is becoming the norm in the U.S. as well. The one drawback of R1234yf is that it is flammable; however, bursting into flames has not been an issue after a decade of use in Europe.

A Leak in the Refrigerant

As with other systems, a fluid leak can cause a serious breakdown in the AC system. It is critical for the proper cooling of the passenger cabin that any refrigerant leak be stopped and refrigerant refilled.

How to Diagnose and Fix a Leak

Unlike other fluid leaks, a refrigerant leak is difficult to diagnose simply by looking on the ground. Refrigerant is colorless and mostly odorless, and spends most of its time in the AC system as a gas. Here are a few clues that your vehicle may be leaking refrigerant.

If a hard part repair of your car’s air conditioner system isn’t an option, another way to repair leak points in the condenser, evaporator, connection hoses, gaskets and o-rings is to purchase Red Angel A/C Refrigerant Stop Leak. A can costs around $40 and it contains 4.5 ounces of R-134 refrigerant plus stop leak. Red Angel A/C Refrigerant Stop Leak is specially formulated to repair leak points without solid or particulate matter that can clog the A/C system.

Start the engine and turn the A/C all the way up. Shake the can well and connect it to the low side service port. Depress the top of the can to dispense the product for three to five minutes, or until the can is empty.

How a Car A/C System Works

An air conditioning system begins with the compressor, which takes the liquid refrigerant and compresses it into gas, forcing it out into the hoses and towards the condenser.

The condenser works in much the same way as the engine’s radiator. In fact, the condenser sits in front of the radiator under the hood and looks a lot like a second radiator. The refrigerant enters the condenser under high pressure and extreme heat. As it passes through the condenser, it gives up its heat to the air and turns into a liquid, much the way steam would turn into water is cooled.

From there, the cold liquid refrigerant flows to the evaporator where the work of cooling cabin air gets done. The evaporator is the only part of the A/C system that is not located in the engine: it is usually near the feet of the front passenger. The coil of tubes allows refrigerant to absorb the heat of the cabin while a fan blows the cooled air through the vents. As the refrigerant picks up heat, it turns back into gas and heads again to the compressor to begin the cycle again.

The evaporator also removes humidity from the cabin, which helps the people inside feel cooler. This is the water you might see dripping under the car on a hot day. Unlike dripping refrigerant, a water leak is not a problem. Compressors, condensers and evaporators can break down, as can any of the smaller parts of the air conditioning system, but a refrigerant leak should always be considered first as the most likely culprit.

Whether it’s a leak or something else that is causing your air conditioner to need recharging, be sure to use the right refrigerant type based on the make, model and year of your car or truck to keep the system running smoothly. 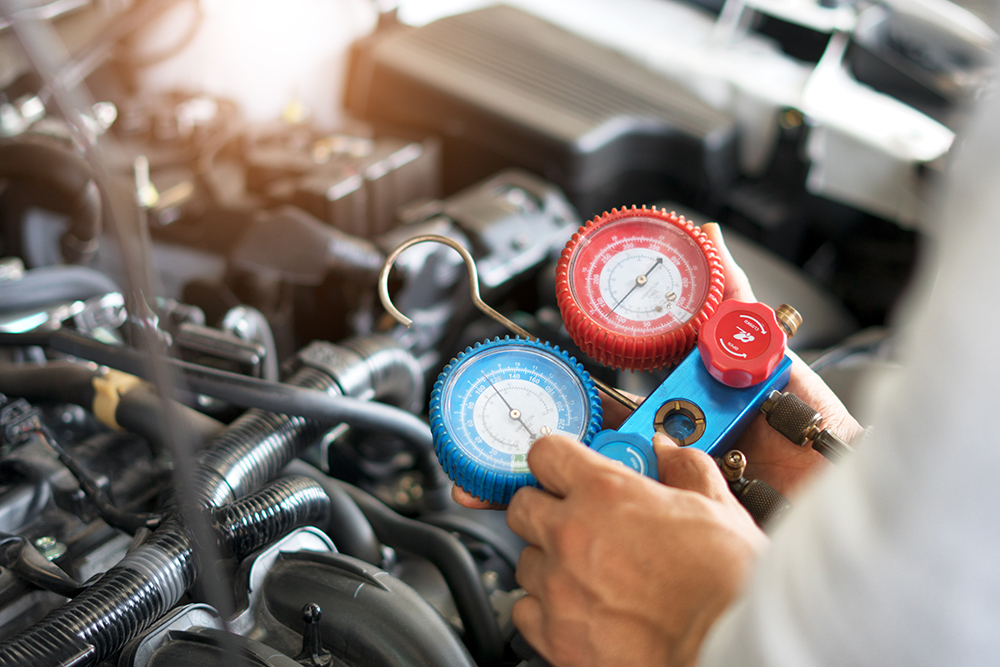 How to Fix a Car Air Conditioning Leak 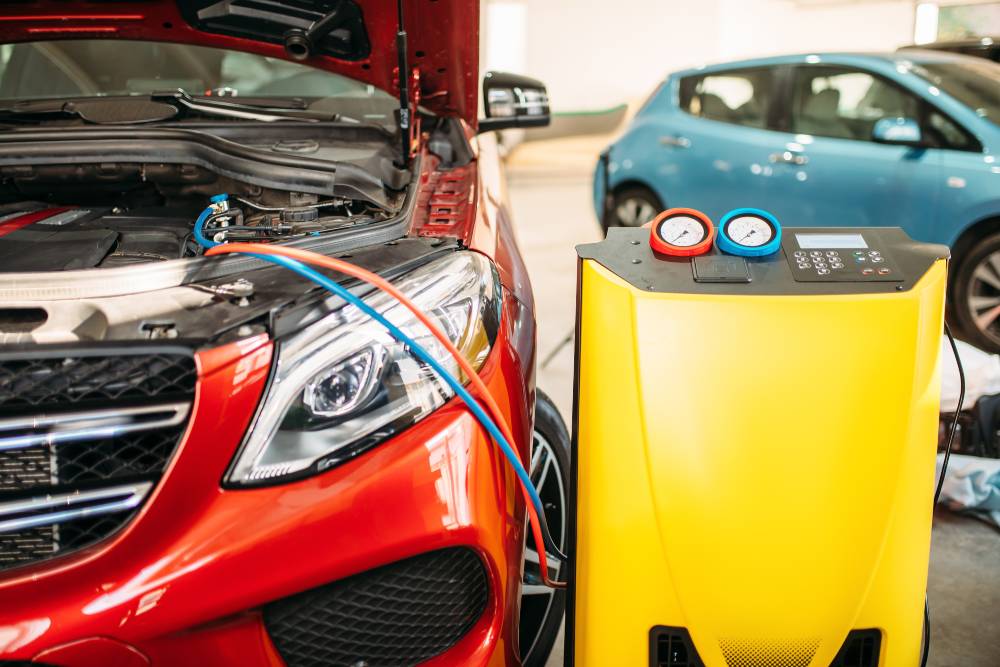 How to Recharge the A/C in a Car 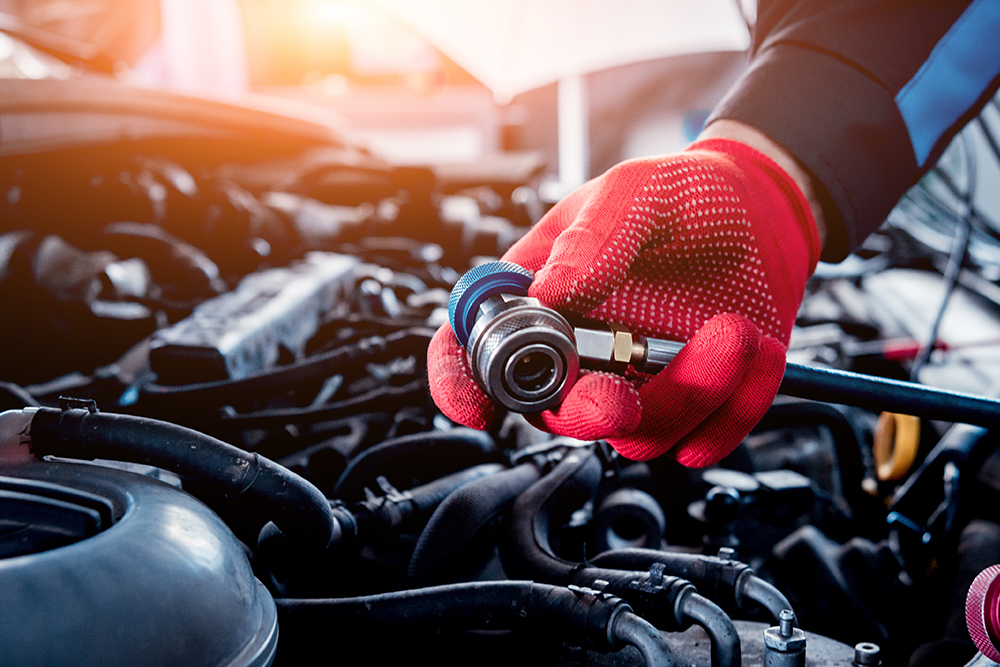 What Is an Oil Injector and What Is It Used for?